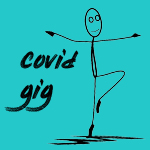 Gigging in the COVID world…

Well bugger me if we haven’t only gone and done a gig!

This report should’ve really been done two weeks ago whilst it was fresh in my mind and before the copious pints of road crew fuzzed my shizzle up.

Anyway, it was the 13th sept at the marvellous Waterloo bar in Blackpool. Hosted by the equally wonderful KDS promotions. It was our first official socially distant gig, believe me when I say we’ve had plenty that weren’t intentional.

The lay out of the room was impressive. It was like a jazz lunch, people sat tapping their toes. Like a west coast Ronnie Scott’s. Only without the awful jazz nonsense.

A big shout to all the bands who were playing that day. MC16, zero tolerance, benefit state, and the sentence.

To be honest, the gig went great for us. Could’ve done with an on stage sound check before we played, but that’s a minor nit. We’d only rehearsed twice since lockdown but the songs came flooding back. Like old noisy friends who refuse to fuck off.

The set flew by, as they always do. It was novel to see Mr Stine actually stay on stage for a full gig. He generally buggers off and causes a nuisance in the crowd towards the end. It must’ve killed him! Oh, and we did an unplanned encore. One we hadn’t prepared for but we’re awesome and it went smoothly. Which was nice.

So it was great to be back. We’re supposed to be out in November but we’ll see how things pan out. And next time I’ll write it earlier. Maybe. Who knows…….LJ Kingcrow