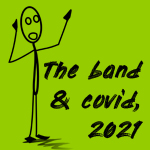 Well it’s been a while ain’t it.

Nah, you’re not that lucky.

2021 was a strange one for sure. Once we were finally let out to play in the summer by our Dad’s in Downing Street, we were off. Like every other band out there we avidly read the Music Union’s guidelines.

All the cooped up frustrations of the past 18 months or so were released in a glorious mess of punk ‘n’ roll nonsense.

The Kingcrows were flying high again.

Gigs were planned all over this greenish and mainly pleasant land.

We expanded our little noisy crusade with fans in tow down to Nuneaton (Queens Hall), which was fun. This was a gig laid on by the Dudes Punk Rock Show.

We went down so well that they’ve asked us back again this year – Idiots!

Next, we had our first gig abroad, well Wales, but it is another country so you’re not taking this from us.

So, anyway, flying through gigs we were, until October when Covid got our intrepid singer. Bugger. We ended up cancelling a few gigs due to this but these things can’t be helped.

This kinda set the scene for the rest of the year to be honest.

Gigs were cancelled, bands pulled out, bands stepped in. Like I said, a truly weird one.

We finally managed to get our collective arses to Birmingham, which had been on our bucket list for a while now.

Great gig and the crowd were really welcoming. Indeed, we’re so flipping fantastic this is another venue who wants us back.

By December 2021, we ended up doing a massive 12 gigs, not our finest number, but you play the hand you’re dealt.

This is going berserk at the minute. We have a ton of gigs planned for the rest of the year, including the big shiny new Punk Festival in Scarborough. This has been postponed twice due to the lurgy, so third time lucky. We’re really looking forward to this one.

So where are we band wise now?

We’re all still here, which is good. We’ve been actively working on new material for the new album. We’ve gigged some of these tunes which have gone down well.

It’s always tricky bringing in new stuff as inevitably some old stuff has to be moved.

Already we have the new album written with 13 tracks of the finest Kingcrowsium available.

Maybe even a surpise or two.

We’re in no rush to record yet – we’re gonna get everything gig ready first. We never record anything that we’ve not played live, ‘cos we’re “musicians”, it’s what we do and we do it well.

We’re still getting played on the radio which is always a joy to hear. We’re in touch with even more USA & UK stations too who’ve not played us. We demand to know why and don’t they realise who we are ????.. sheesh.

The band have put feelers out for European gigs, and Japan too. That will be a bit special.

So in wrapping up, we’re not dead yet, we just smell that way.

Keep those peckers up kiddies……..